What were some things people were able to accomplish as a result of Smalltalk?

“Starting in the early 1970s the early Smalltalkers and other Xerox PARC researchers invented the concepts and mechanisms of Personal Computing, most of which are still dominant today.

He elaborates on this:

Using the Smalltalk platform, the fundamental concepts of a personal graphic user interface were first explored and refined. Those initial concepts were widely copied and further refined in the market resulting in the systems we still use today…Smalltalk was also the vector by which the concepts of object-oriented programming and design were introduced to a world-wide programming community. Those ideas dominated for at least 25 years.

David Buck and Craig Latta go into some more detail about what Smalltalk introduced: 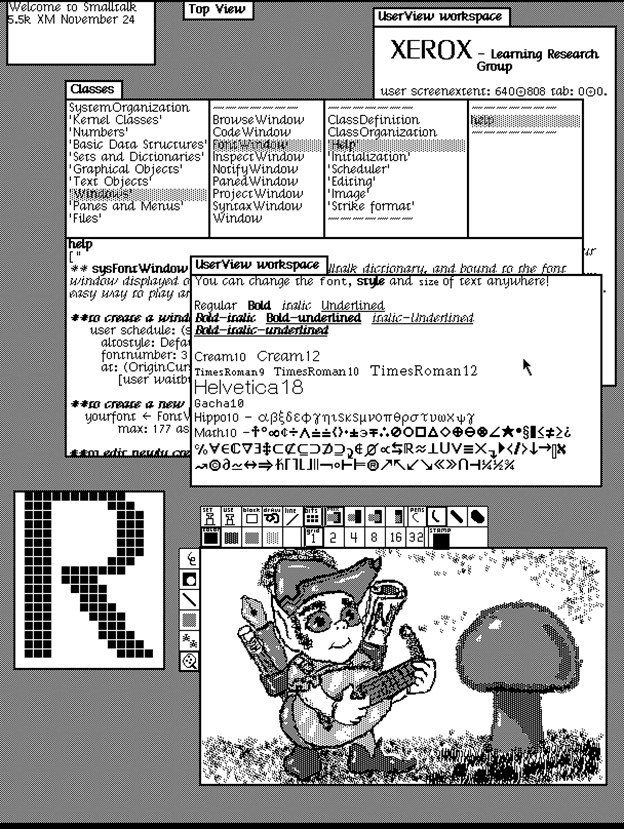 Smalltalk did something more important than take over the world—it define the shape of the world!

As a result, if we say “Smalltalk has declined,” that’s not quite correct: many things Smalltalk introduced have persisted, and it’s only the things that have not spread and persisted that we think of as Smalltalk distinctives that have declined.

I remember meeting this gentleman who was by profession a photographer. And he showed me this prototype that they had been working on…ultimately, it was the very first spreadsheet…and it was a remarkable tour de force. And I said to him “I don’t understand how you did that.” I mean, I just couldn’t believe this non-professional. He said “well, I’ll show you”…I remember saying to him “that is the ugliest piece of code I’ve ever seen.” And he said “oh, that’s okay, because it does what I want it to do, and the professionals…are going to rewrite it all; this is the spec.” Suddenly the prototype became the spec.

The benefit of Smalltalk’s tooling is also demonstrated in the creation of Squeak. It was written in Smalltalk itself–that is, in another Smalltalk version:

Our bootstrapping strategy also depended on being able to debug the Smalltalk code for the Squeak virtual machine by running it under an existing Smalltalk implementation, and this approach was highly successful. Being able to use the powerful tools of the Smalltalk environment saved us weeks of tedious debugging with a C debugger.