Everything is an Object

For developers who are used to languages like C++ or Java (which Smalltalkers would call “not fully object-oriented”), it can be surprising to see that in Smalltalk everything is an object, down to the simplest primitive integer or boolean.

A design principle behind this is:

Uniform Metaphor: A language should be designed around a powerful metaphor that can be uniformly applied in all areas.

But what is the point of this principle? Why should it be applied, even when it seems like it may have an adverse performance impact? Here is an example (emphasis mine):

…control in the system becomes complicated if processing is performed extrinsically. Let us consider the process of adding 5 to a number. In most computer systems, the compiler figures out what kind of number it is and generates code to add 5 to it. This is not good enough for an object-oriented system because the exact kind of number cannot be determined by the compiler (more on this later). A possible solution is to call a general addition routine that examines the type of the arguments to determine the approximate action. This is not a good approach because it means that this critical routine must be edited by novices who just want to experiment with their own class of numbers. It is also a poor design because intimate knowledge about the internals of objects is sprinkled throughout the system.

The phrase “novices who just want to experiment with their own class of numbers” is the key. We’ll take it one subphrase at a time:

In context, “storage management” refers to managing objects in memory:

Objects are created when expressions are evaluated, and they can be passed around by uniform reference, so that no provision for their storage is necessary in the procedures that manipulate them. When all references to an object have disappeared from the system, the object itself vanishes, and its storage is reclaimed.

Although it’s not explicit in “Design Principles”, the handling of persisting code and data (which are the same thing in Smalltalk) is also automatic. All running objects are persisted out to the image on disk and loaded back in from there.

An impact of both aspects of storage management is apparent in the code:

A way to find out if a language is working well is to see if programs look like they are doing what they are doing. If they are sprinkled with statements that relate to the management of storage, then their internal model is not well matched to that of humans.

This concept is related to levels of abstraction and expressive code. Smalltalk code represents the conceptual objects, and little attention needs to be paid to allocating memory or to serializing or deserializing data.

On most development platforms, there are boundaries between your tooling, your source code, the underlying language/libraries, your compiled program, and the debugger.

In Smalltalk, most of the barriers between these are removed. Your own code, Smalltalk’s core classes, and the classes that implement your editor and debugger all run in the same memory, and the source for each is available and modifiable.

This has many impacts: 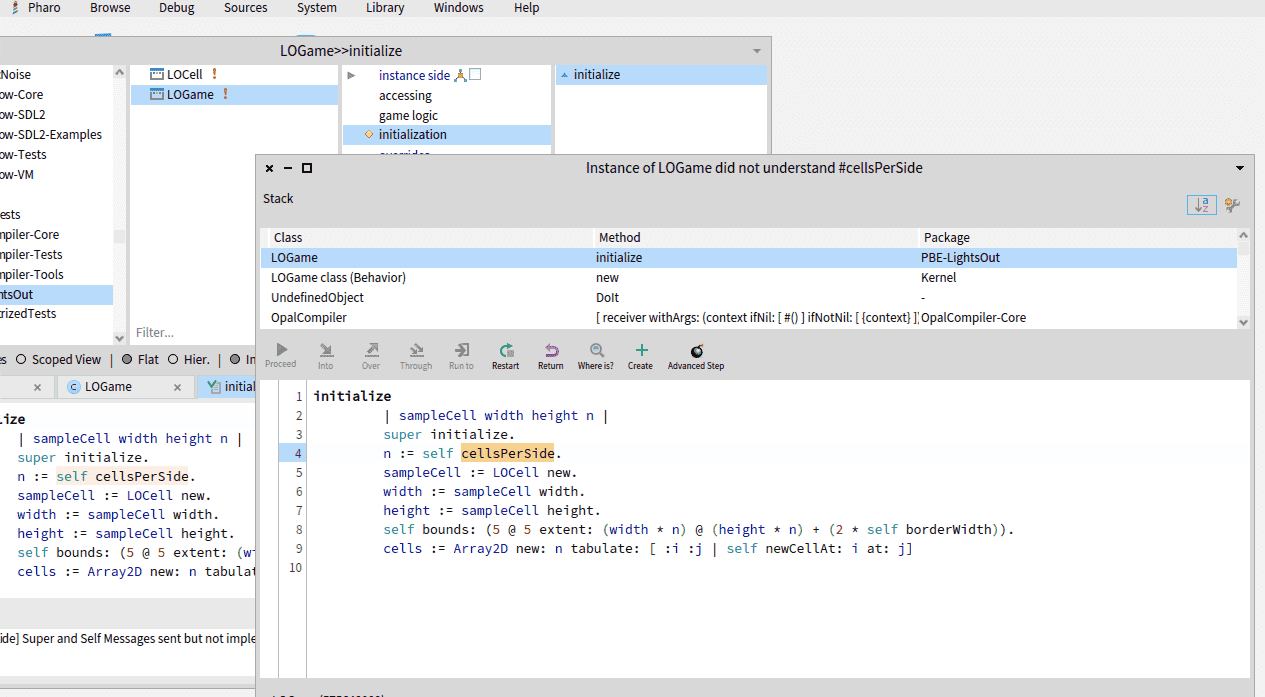 If I give you something you can play with and extend…that’s easier than giving you nothing and saying “make something.” …When you start with an object that does something, and then you can put many objects like those together and have them interact, and then extend and make them behave a little bit differently, you can take a very incremental approach to learning how to control a computer system.

It fit right into the curriculum ideas for how to teach kids: give them a starting point, and really help them learn how to refine it. And we were really exploring this programming by refinement, and really seeing a whole new software engineering process, where you programmed iteratively. Started out with a prototype, and you kept changing it and working it until it was what you wanted, and then you started figuring out where performance could be improved.

The original Smalltalks controlled the graphical user interface because they invented it: there was no pre-existing GUI. Later, after the creation of the Macintosh and Microsoft Windows, some commercial Smalltalks did work with native operating system widgets. But the Squeak project took a different approach:

At a time when the world is moving toward native host widgets, we still feel that there is power and inspiration in having all of the code for every aspect of computation and display be immediately accessible, changeable, and identical across platforms.